ARCSAR is an EU project as part of Horizon 2022, with the main aim to establish the first formal security and preparedness network for the Arctic and the North-Atlantic. The project is led by the JRCC in Northern Norway with a consortium composing of 20 partners from 12 countries. Other participants brought in to carry out this LIVEX were the Governor of Svalbard, The Norwegian Coastal Administration, and the Association of Arctic Expedition Cruise Operators (AECO). The exercise allowed partners of the ARCSAR consortium to participate in a live Search and Rescue (SAR) exercise where security and preparedness practitioners demonstrated procedures, gaps and challenges in the case of an incident. This brought together representatives from the Coast Guards of Norway, US, UK, Finland, Iceland, Canada and the Faroe Islands, facilitating international collaboration. 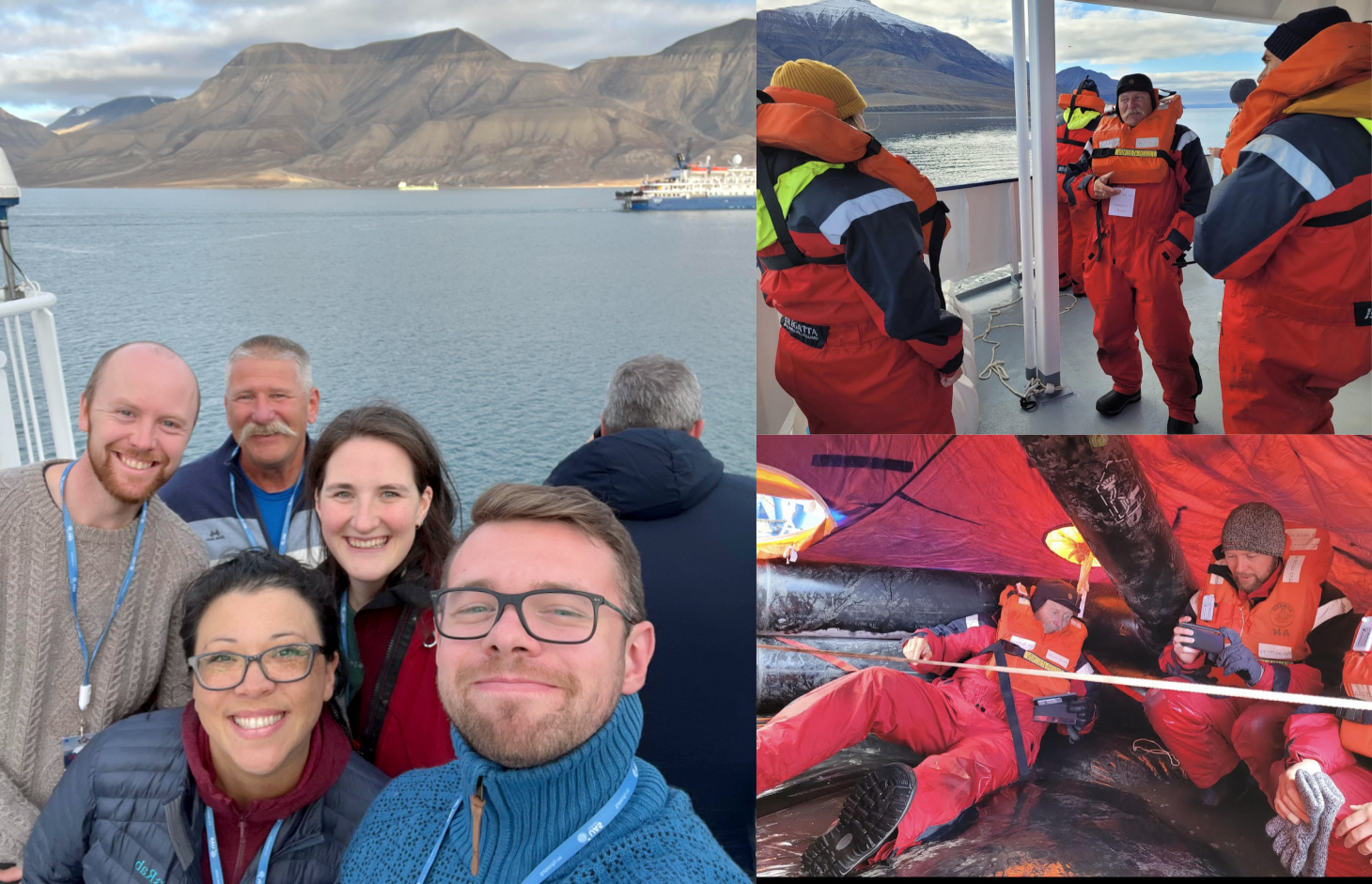 The exercise took place aboard the polar tourism vessel M/S Quest. The first three days were spent exploring the Western fjords of Svalbard with zodiac landings, along with SAR related presentations and discussion before the practical LIVEX event on the 31st August. The western fjords of Svalbard including Tinayrebukta (left) and Lillehookfjorden (right). Photos by William Copeland

On the morning of 31st August, a simulated fire broke out in the engine room of M/S Quest, necessitating the evacuation of passengers and crew. Those with ‘injuries’ received first aid of varying levels at various locations. Meanwhile the coastguard and various search and rescue (SAR) practitioners communicated to ensure an efficient emergency response. Evacuation took place via helicopter, lifeboat and life raft, with all ending up aboard the Norwegian coastguard vessel KV Barentshav by the end of the exercise. The Norwegian military helicopter SAR Queen was used both to evacuate passengers and to trial new technology which can help to find people using a generated phone signal, pinpointing those on the ground / at sea regardless of phone coverage. Various stages of the LIVEX event including the use of the SAR Queen helicopter (top left), M/S Quest ‘on fire’ (bottom right), the evacuee registration point aboard KV Barentshav (top right) and a view from the lifeboat of the rope ladder used to board KV Barentshav. Photos by William Copeland.

Demonstrations of where information on risk assessment and situational awareness support is relevant and where it could help to mitigate potential risks to life and safety in the future were presented, discussed and evaluated over a five day period. Throughout LIVEX, qualified evaluators viewed the scene from various observation points and reported their findings / evaluations at the ‘hot wash’ event after the practical section. These types of LIVEX events challenge gaps in coordination, preparedness, competence and communication in the case of an actual incident at sea. This is the first international project focused on a formal SAR preparedness activity in conjunction with the cruise industry, an ever growing sector in high Arctic regions. Istjenesten presented alongside e-Geos on current products and services and the use of the 2nd Generation COSMO SkyMed for future incident response in ice covered waters. A case study of an event taking place off the north east coast of Greenland was used, with COSMO SkyMed imagery used to present what is currently on offer and what may be available in the future for SAR teams. Findings and recommendations from this event were later discussed at an internal MET debrief meeting at MET in Tromsø.

Experiences gained during this event, and the overall participation in the ARCSAR project, will be used to improve sea ice and weather data provision for emergency scenarios, and will help / has helped to increase awareness amongst the SAR community of the products and services that MET has to offer. The project will also provide recommendations at a senior level for how industry can support ice services and SAR practitioners alike through improving channels of communication and timely provision of imaging data.