The summer of 2020 broke several records in the Arctic. Temperatures were higher than ever recorded in some regions [Russian heatwave, Svalbard heatwave] and announcements of striking ice conditions for the Arctic arrived quickly one after another all summer.

The mean sea-ice extent in July this year was record-low [read July cryo-post] and was followed by a second-lowest extent for August. At present [10 September 2020] the ice is not only approaching its yearly minimum state but has also got very close to the all-time record-low sea-ice condition which happened in 2012, see the figure below. 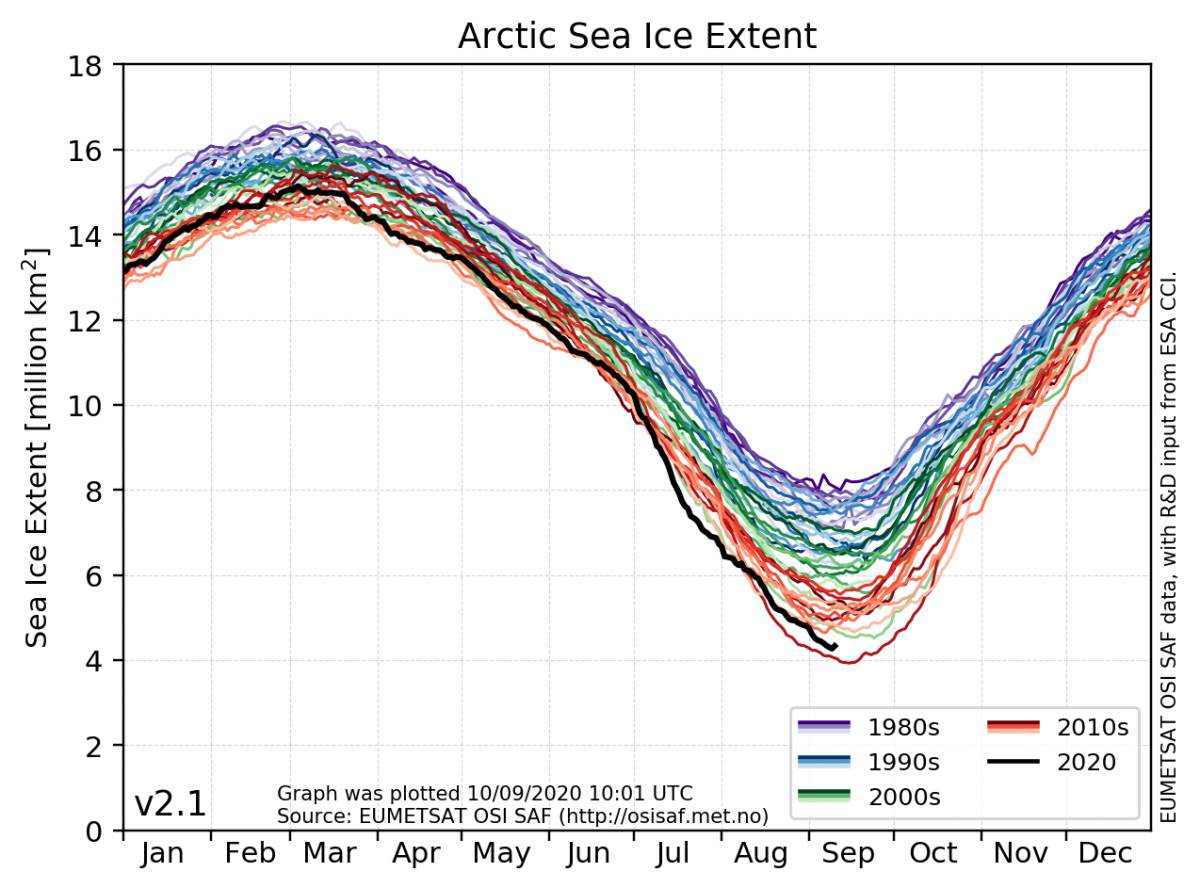 The lowest ice extent ever recorded in the Arctic was 3.9 million km2 measured on 14 September 2012. With a continuation of the recent melt rate this summer, we could have reached the same extreme levels as in 2012 within a week. However, today’s small increase in the daily extent might indicate that we have reached this year’s minimum (see the black line in the figure above). This is supported by numerical models which for a couple of days have forecasted a turning point before reaching the extreme minimum of 2012 [sea-ice forecasts]. 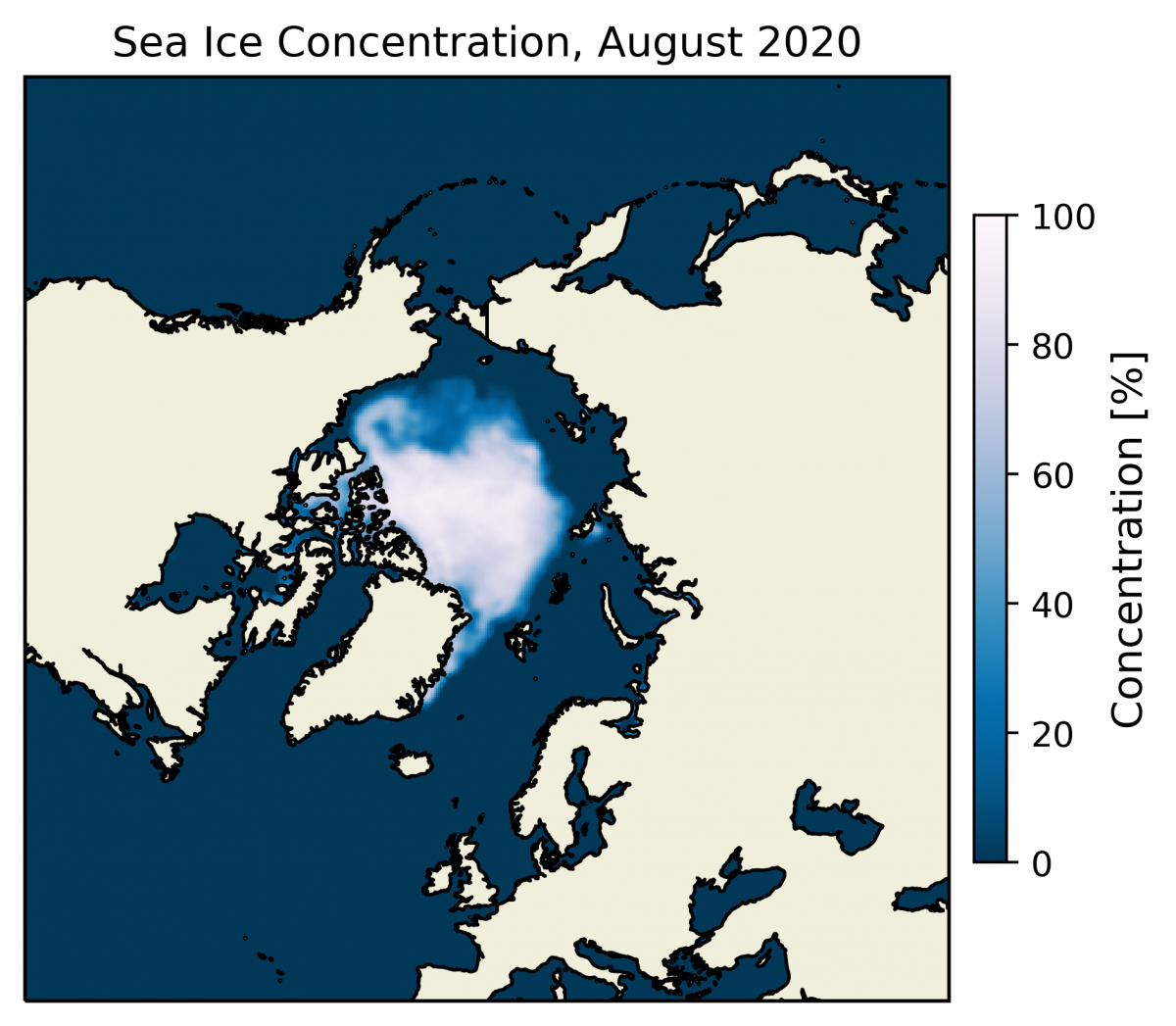 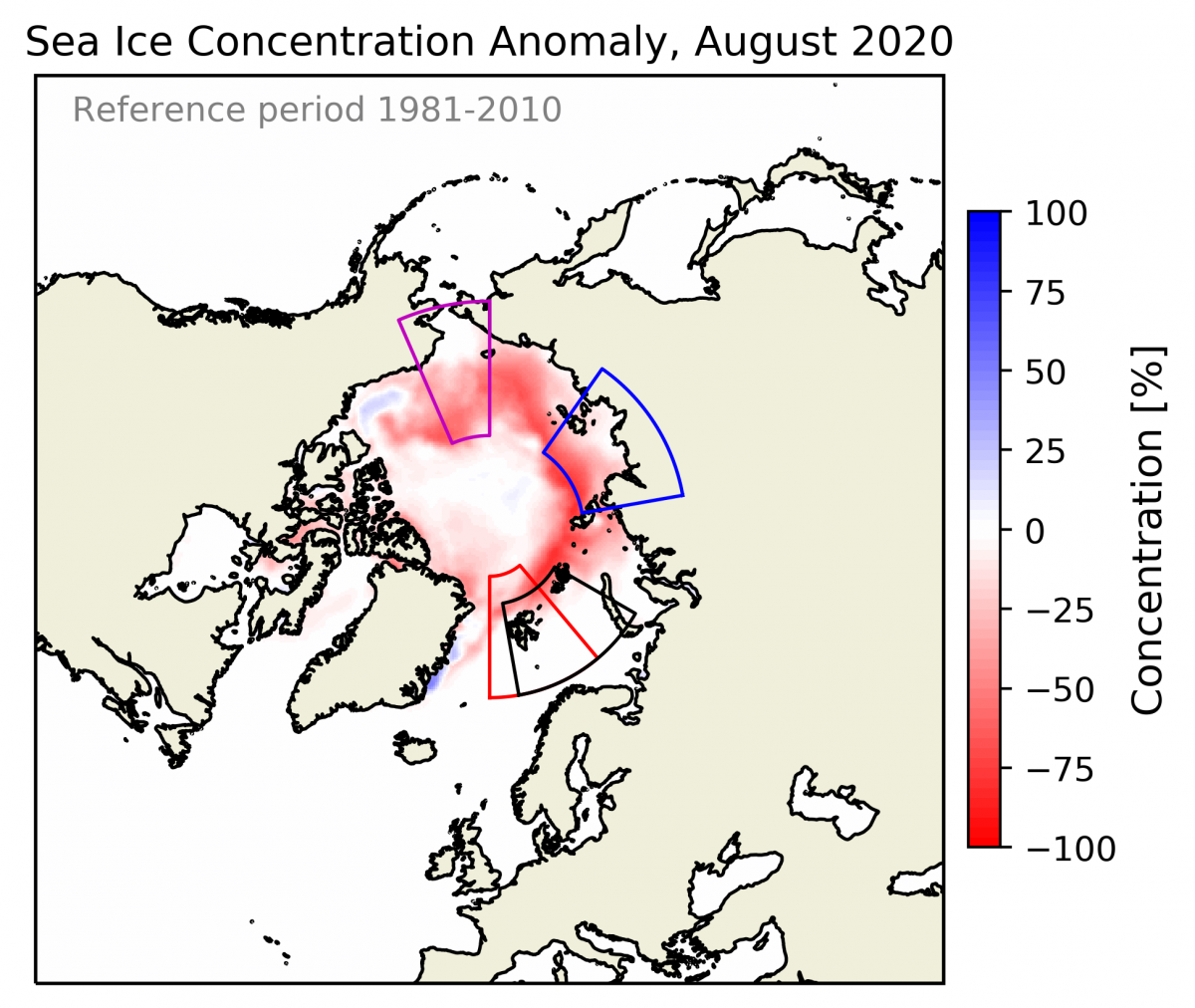 Besides the sea-ice extent retreating northward, the ice pack itself is also observed to be less dense with lower concentrations [Surprisingly loose ice cover toward the North Pole]. This is also seen in the anomaly map above (to the right) showing the anomalous sea-ice concentration in August 2020 relative to the mean August concentration within the reference period 1981-2010. It shows strong negative anomalies (in red) outside today's ice extent but in addition shows lower concentrations (light-red) in large parts of the ice pack north of Greenland.

On regional scales, the ice conditions also got a lot of attention this summer. Below, four regions have been picked out (see anomaly map above for their positions). For the Svalbard region (red box) we now have a significant and long-lasting record-low, and also the Barents Sea as a whole (black box) now has record-low ice extent. Besides, toward the Siberian Arctic, the Laptev Sea (blue box) experienced record-early melting and the Chukchi Sea (purple box) had a significantly fast “free-fall” reduction of sea ice earlier this summer. 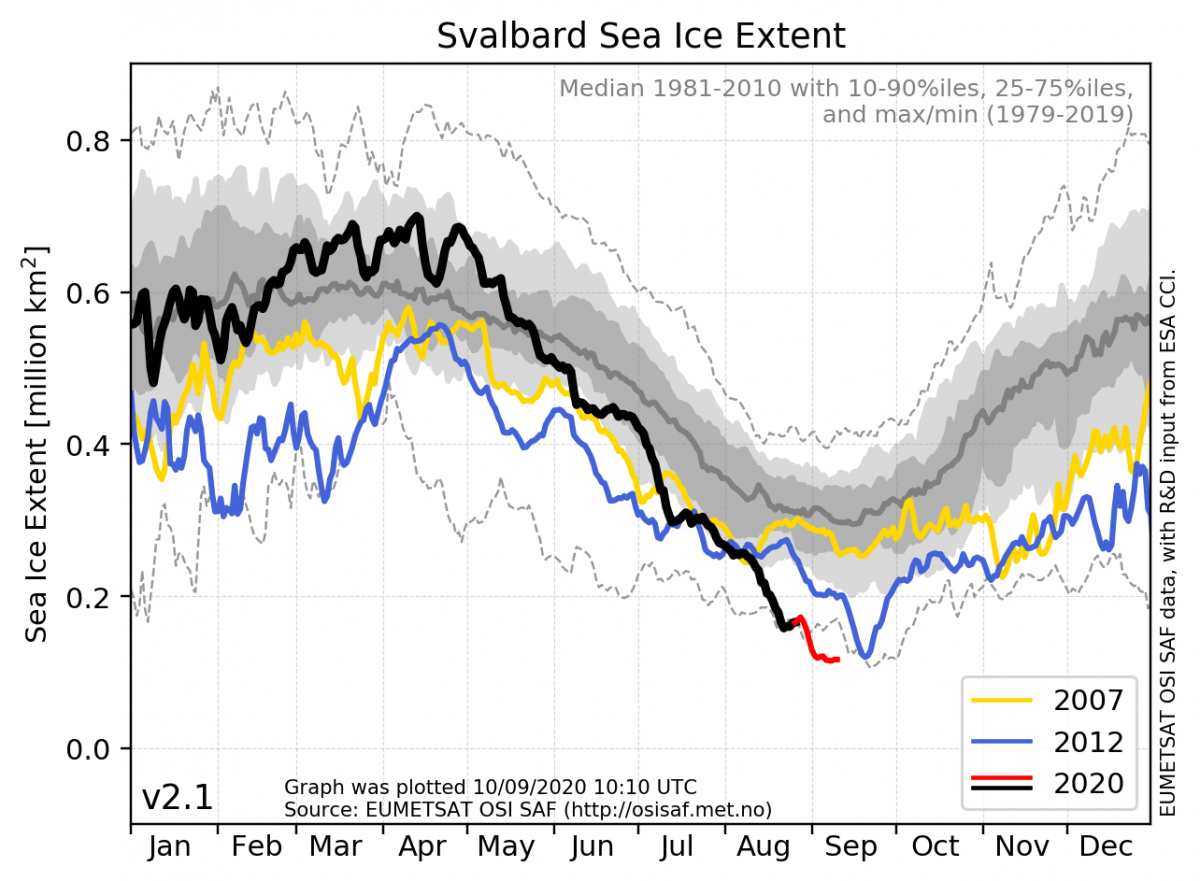 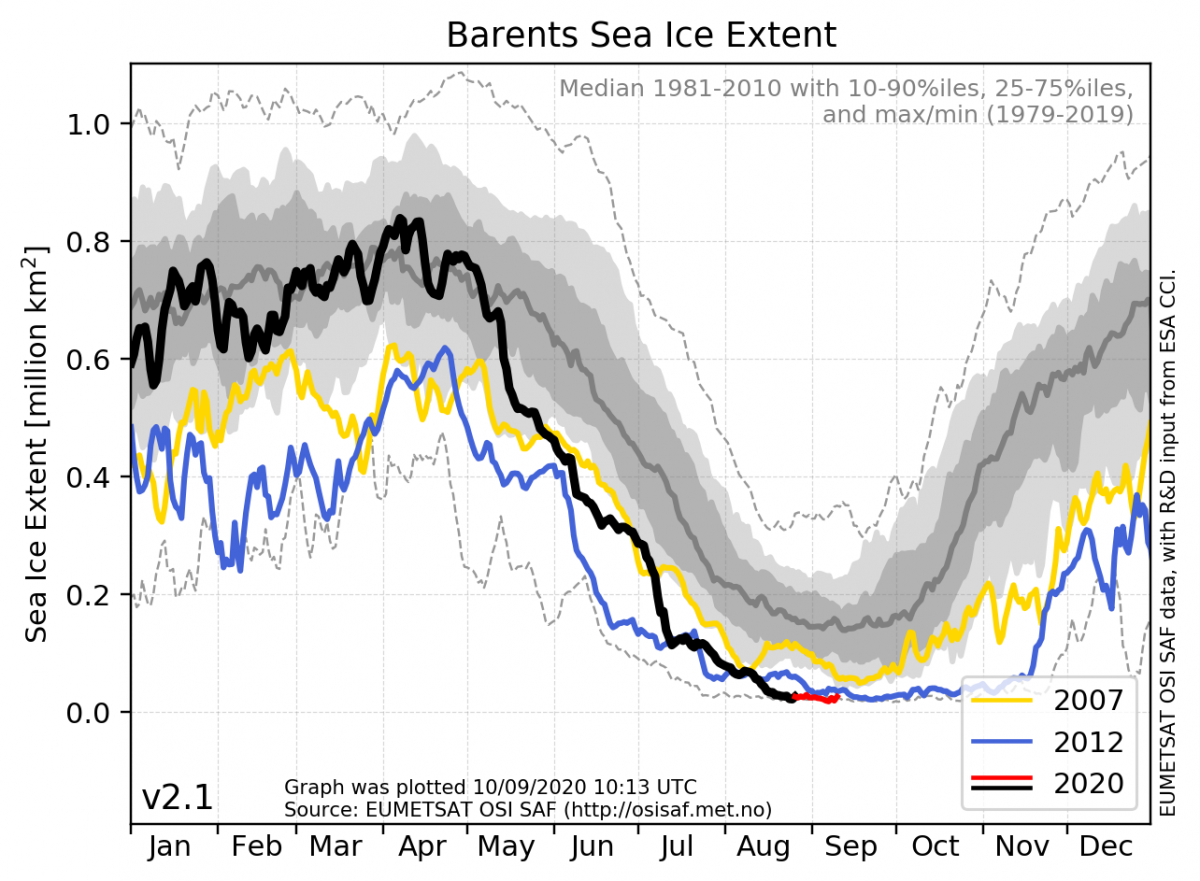 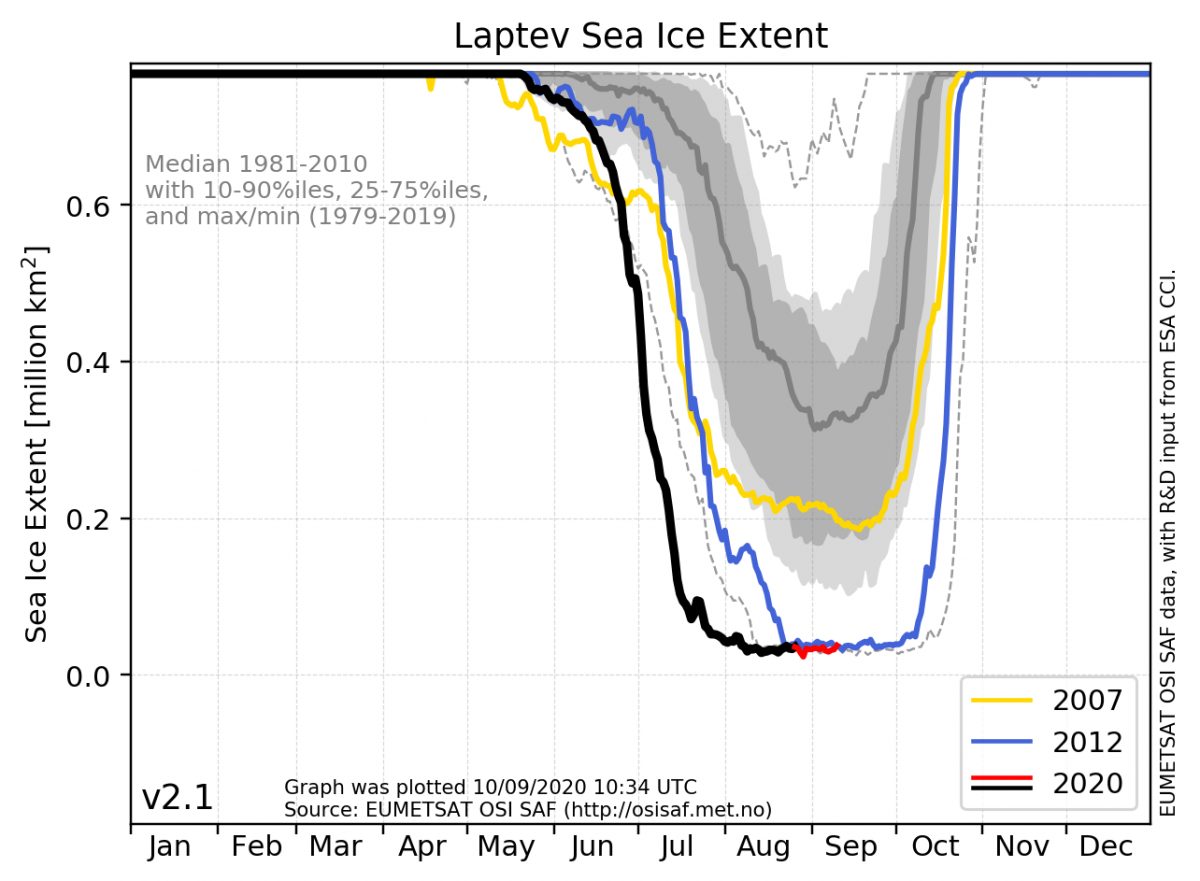 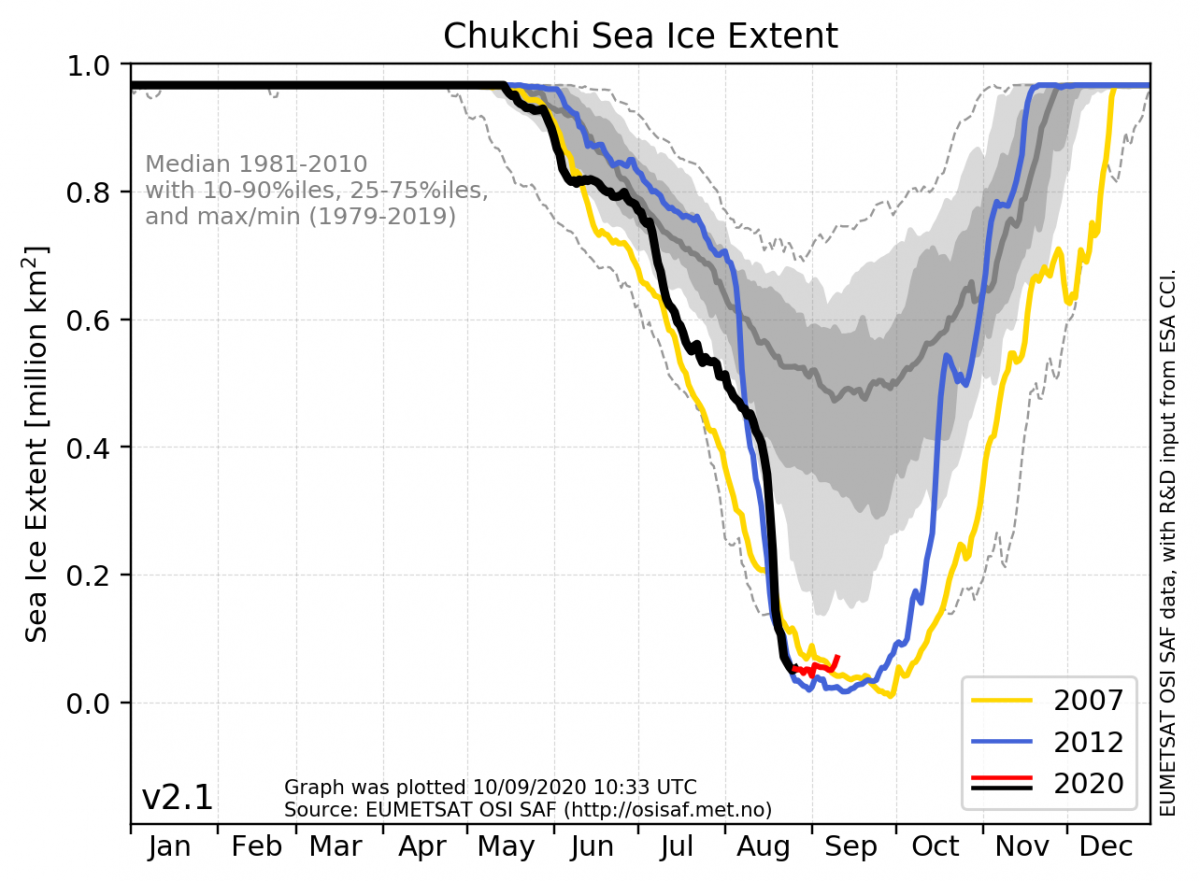 This year’s Arctic sea-ice maximum occurred on March 3 with a coverage of around 15.2 million km2. The average extent for the month was 14.8 million km2, placing March 2020 as the 10th lowest March on record. Since the end of March, the sea-ice cover has shrunk faster than normal, leading to the second-lowest April average value on record, and the fourth-lowest values for May and June. Since July 10th the daily sea-ice extent has been the lowest on record for this time of year. In mid-July, the sea ice cover dropped below 8 million km2 which was a typical level for the Arctic sea-ice minimum in the 80s but now occurred two months earlier than the end of the melting season. The negative anomaly is largest along Siberia and is partly caused by record-high temperatures at the end of June. August followed with a second-lowest extent on record, and now September seems to have reached its minimum on 9th of September placing 2020 to hold the all-time second-lowest ice extent on record.

The Arctic sea-ice cover has a natural waxing and waning with the seasons. Sea ice melts in the summer and grows during winter. The summer melt season usually begins in March and continues until a minimum is reached in September, at which point typically half of the sea ice cover from March has disappeared. Following the sea-ice minimum, the growing season starts and continues until a maximum is reached again next March. Although a large yearly change in ice cover is natural, monitoring of the sea ice with the use of more than 40 years of satellite data measurements, shows a significant decrease in the Arctic sea-ice cover - for all seasons - during these 4 decades period.

Sea-ice concentration is a parameter used to describe how densely the sea ice is packed. It is expressed by a continuous scale from completely compact ice (100%) to an open ocean with no ice (0%). When studying the sea-ice extent it is common practice to define a threshold for concentration that divides the surface into “ice” and “no-ice”.

Sea-ice extent is the area covered by a significant amount of sea ice. It is common to use 15% sea-ice concentration as the threshold to separate between “ice” and “no-ice”.

The Arctic sea-ice minimum marks the day of the year with the lowest sea-ice extent.

The Arctic sea-ice maximum marks the day of the year with the largest sea-ice extent.